I started this blog as a way to capture thoughts and feelings that I just felt compelled to write down, inspired primarily by my sister’s blogs. Writing has always been one of those things close to my heart that I just never seemed to have the time to get around to. I initially wanted to at least try to get something down twice a month, if not more, but of course, as it tends to happen, days blur and before you know it another month has turned the corner. Last week, I had expected to be here writing something down to publish today, and well, here I am. But the content of this posting is much different from what I had originally thought I would be writing about.

It was 16 years ago this past February that my first cat, Gandalf, had passed away due to some disease or other that I have now forgotten (probably gratefully so). In May of that year, I finally decided that it was time to have another companion join the household. So I went on down to the pet store where some of the local shelters would bring their animals that were up for adoption. I had gone a couple times beforehand that week to spy out a likely candidate and had settled upon a black colored kitten as I recall. When I went for the third time, in which to fill out the paperwork to make the adoption, I found that a new group of kittens had replaced the old. Determined as I was at that point, I was not going to leave that time without having a new friend to bring home. It had to be fate that brought me there that day, and that did not compel me to adopt that little black kitten on my previous trips.

The new batch of three or four kittens were apparently all siblings born the month prior that had been rescued by someone in Ewing, New Jersey. I don’t recall exactly what they all looked like, but I don’t recall them all looking too similar despite having the same parentage. One, however, did leap out to me (figuratively speaking). He was a tan-ish colored stripped tabby that was huddled as far back in the cage that he could get. While his brothers and sisters were frolicking about being as cute as could be, this one just sat in the corner trying to hide as much as the various dishes and playthings would allow. Something struck me about that kitten, and I just knew he had to be the one that I had to take home. I just couldn’t imagine anyone else picking him over his much more fun and friendly siblings, and I just couldn’t bear the thought of him being left in that cage and going back to the shelter for the rest of his life.

Yes indeed it was fate that brought us together that day. With my first chance to hold him, all he wanted to do was sneak away somewhere and hide. I just couldn’t let him go – my heart told me that he needed to come home with me. As it turned out, as I was filling out the paperwork for the adoption, the lady from the shelter had told me they weren’t even going to bring him to the store that day, and it was only at the last minute that they decided to go ahead and do so anyway. Yes it was fate. She was very happy that someone decided to adopt the scared little kitten, whom they had named Wheatie due to his color.

So it was that day that Wheatie took the car ride home to the condo I was living in with my fiancé at the time. I was originally going to name the kitten Galen, after the character in the Planet of the Apes television series, but she felt it sounded too much like Gandalf (yes, named after the famous wizard), and wanted to pick something else, the pain of that first loss still close to our hearts. I don’t recall exactly how it came about, I think it may have been inspired by the particular volleyball that made an appearance in a Tom Hanks movie, but we settled on the name Wilson, though we always called him Willy. From that point on, he became our Sweetie Wheatie and Silly Willy.

Times weren’t always that good in the first couple years of Willy’s life, though. He always seemed to be getting sick or having some kind of infection that required a trip to the vet’s office. I hated it every time because of his shy and skittish nature. He was always afraid of people, and even took a few days to warm up to us. Through the years, he would always go into hiding whenever we had company around, but he was the sweetest and friendliest cat to us. Anyway, I remember saying to myself, during one of those trips to the vet, that Willy had better live a long time for all the trouble he was going through in his early years. Gandalf was only with us for a year or two at the most before he became suddenly ill and we had to put him down within several days of the first onset of symptoms. As it turned out, despite having a few more issues later on in his adult life, Willy did indeed hold out for a good long time.

Willy passed away at home sometime between 5:00 pm and 9:00 pm yesterday. The last time I saw him was for dinner time, when he and Flash assumed their usual positions in front of the makeshift door at the top of the stairs waiting somewhat impatiently for me to come up and deliver the grub. Nothing seemed out of sorts, and if either was going to give me a worry, it would have been Flash whom I thought this blog would initially be about. Flash is a couple years Willy’s senior and we had just taken him to the vet on Monday, thinking we were going to have to put him down. But it seems fate had one more twist to give us. After going upstairs Willy and Flash assumed their spots in the bathroom (their feeding spot to try to keep the carpet nice and tidy) while waiting for the dishes to be filled. I set the dishes down and gave each the customary rub as I did for the last decade for each meal. Then I went downstairs to start dinner for ourselves while waiting for Shannon to come home.

It was about 9:30 when we finally convinced Erin to get ready for bed. She went upstairs to change and came down a minute later to give the hugs. She told me that she saw Willy’s hind quarters sticking out from under the end of her bed. I told her that he was probably eating Hershey’s food (our third cat who was rescued by our Brother-in-law last year and had taken up “temporary” residence in our home since then) since I usually had to put her bowl under the bed in order to give her enough time to eat before one of the boys jumped in on the goods. Then she told me she had tried touching him, but he wasn’t moving and just seemed to be laying there. Something inside of me right then and there knew what I would find when I went upstairs. Thankfully for Erin’s sake Willy’s front was hidden by the bedskirt. Somehow I think he knew just where he had to go in his last final moments to spare her the shock.

Willy died as he had lived. Quiet and peaceful. I am grateful for the fact that he chose to spare us the additional pain of having to make the choice for him, as we had feared with Flash earlier this week. He was our Sweetie Wheatie up until the very end and I will miss him forever. 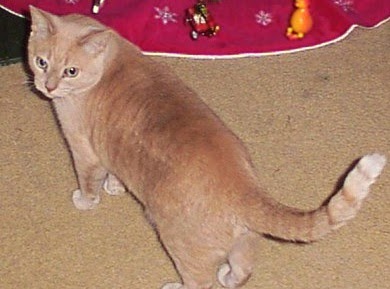 Posted by BJWyler at 9:17 AM No comments: