A long time ago, when I was a wee lad, I was introduced to a Science Fiction program on PBS about a strangely dressed man who apparently travelled around in a big blue English Police Box that was bigger on the inside than it possibly could be when looking from the outside. I was captivated and became a fan, just as I was a fan of Star Wars and Star Trek. The show was called Doctor Who and it was a campy little thing that we inherited from England. A while ago, during the 50th Anniversary of the show in 2013, I wrote a blog-like entry that I later copied over to this blog, called Reflections. I can’t really say how many things in my life have had a profound impact on me and have made me who I am today. I am sure there are many more than I realize, but with certainty my love of Fantasy and Science Fiction has certainly influenced who I am. Throughout my life these three giants of the science fiction industry have been a mainstay in my life through the years, and each of them have changed in significant ways over the course of decades.

I recently learned that Doctor Who is undergoing another change. This one quite likely the most significant change since the program returned to the airwaves back in 2009. For those unfamiliar, the program is about an alien only known by the moniker of the Doctor. The Doctor is from a race that has mastered the ability to travel through Time as well as space with specially designed ships that can change their outer appearance to blend in with their surroundings. The series began in 1963 and the lead character was played by William Hartnell. After three years, Hartnell’s age forced him to leave the show, and thus was born the legacy of Regeneration. Time Lords have the ability to regenerate their bodies when they become old, sick, or injured to the point of death. The concept of Regeneration allowed the show’s producers to continue the program and allow for the changing of the lead actor as each of them departed from the show. Throughout the course of the show’s history, the Doctor was always played by a white, male actor. That will change in the Christmas Special this year when the Doctor will transform into a women – played by Jodi Whittaker.

When the news broke, it was received positively by most fans of the show. Of course there will always be those who do not like the change, just as there have always been those who disliked the next actor to take over from their current favorite Doctor. One of the initial detractors was one of the former actors who played the Doctor – Peter Davison who was the 5th person to take on the role. Overall his reaction wasn’t as negative as others, but bemoaned the loss of a positive role model for boys. His successor, Colin Baker took Peter to task over the comments, and I think they both made valid points. For me, I am torn by this decision.

Throughout the course of its run the show has developed a rich lore and history to the events that transpire, as is expected. Sometimes, also as is expected, especially in the case of Doctor Who, it sometimes has contradicted itself, but when the main character has mastery (somewhat) of time and dimensional space itself, that is easily explained in the lore. In all that time, the subject of Regeneration had been fleshed out more, but never has it ever been specifically stated that a Time Lord can or cannot change their sex. In the original run of the series from ’63 to 1989, when a Time Lord regenerated, it was always into a new body of the same sex – male to male and female to female. The first time that a cross-sex regeneration occurred was with the Doctor’s arch nemesis, the Master, who regenerated from male to female during this new run of the program, a couple of years ago. So as a fan, from the perspective of lore, this change isn’t something that can’t potentially happen. However, as I have been pondering the decision to make this move in the program, I find myself to fall on the side of the detractors of this decision.

That’s not to say that I don’t think Jodie can’t do the job. Quite frankly, I am unfamiliar with her as an actress (or actor, depending on your level of Political Correctness). It’s just that having the Doctor regenerate from male to female takes the program and lore in a direction I am not particularly interested in seeing. When Doctor Who went off the air in 1989, and was effectively killed off by the BBC at the time, I was upset at the loss of such a novel and entertaining science fiction program. As campy and low budget as it was, that was all what made it charming and entertaining. When a potential return was in the works with the 1996 one-off special, I had high hopes to be able to see the return of this fascinating character. However, it was another decade until that return was finally realized. However, the show had undergone such a change that it was no longer the show that I grew to love and look forward to as a boy. I think this decision by the show’s producers only cements that fact. 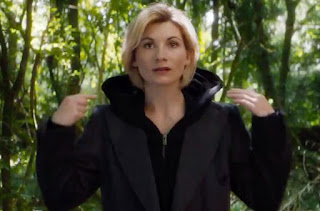 A lot of people happy to see the change have said “It’s about time” and that the show was long past due for a change like this – having had a white male in the lead for over 50 years. I have to take exception to that. Now, I am all for diversity and equal rights, and all that, and am glad to finally see a lot of things that were considered taboo or abnormal decades ago is seen as the normal course of human evolution now. But why in the hell should I have to feel ashamed for being a white male human being, or for enjoying something in which a white male human being is the main attraction, so to speak. Can someone please tell me why I am wrong for being comfortable and proud that I am a white male human being who is trying to make a living in this world and being the best person, best husband, and best father that he can be as a white male?

There is absolutely nothing wrong with having a white male in the lead role of the Doctor. That is who the Doctor is and was. Why is that such a wrong thing? Just like James Bond is a white male womanizing spy, just like Luke Skywalker is a white male farmboy with special powers, just like James T. Kirk is a white male captain of a starship. That’s who these characters are, why should they be any different? These characters and their respective stories are popular because of who they are. I fell in love with Doctor Who because of who the Doctor was and how the events of the show surrounded him. Even during the series return, I have watched a few episodes of the various incarnations of the Doctor, and while I don’t necessarily find the show interesting any more, I was still captivated by the character of the Doctor. All this decision speaks to me is about change just for the sake of change, and that just bothers me greatly. Sometimes change isn't needed.

At the end of the day, I would be a lot more interested in seeing the return of Romana as a character, and letting a spin-off show run with her as the lead. Again for those unfamiliar, Romana is a Time Lord (specifically Time Lady as established in the lore), who travelled with the 4th Doctor for a period of time and regenerated once during the show’s run (one of those unfortunate things that happened during that time to make her more of a typical damsel in distress companion). If anything is long past due for the show’s history, it’s to bring back that character and actually flesh her out more in her own series. That would get me back into the world of the Time Lords more than anything else.

Nope, I am sorry for all those out there who find this to be a fantastic decision. I find it to be complete crap. Call me a dinosaur as Peter called himself in his comments, but (shock of shocks) sometimes changes don’t need to be made and change for the sake of change is not always a good thing. I wish Jodie all the best of luck in the role, and I am sure the program will win over a whole new generation of fans for doing this, but this decision just makes me glad that I was never able to recapture my interest in the show when it returned almost a decade ago. And that makes me sad.

If there was one thing I have always looked forward to, more so than new Star Wars movies (awesome sauce!) and Star Trek movies (the reboots being utter crap), I think that the return of Doctor Who has been one of the biggest things I have ever desired in my life. I think out of those big three, the Doctor had the most influence on me growing up, even more so than my desire to be a Jedi, even if I didn’t realize it. I think I just found the Doctor to be more human and more relatable than anything else. And it makes me sad that I lost that influential character 28 years ago,
Posted by BJWyler at 9:08 PM No comments: