A long time ago, when I used to work at a bowling center during the day when the senior citizen leagues were run, I used to chuckle to myself at some of the “senior moments” they used to have. I just couldn’t understand how you could misplace your glasses or keys when you literally just set them down on the counter not five minutes ago. And then I got old and now I realize just how damn easy it is. That’s kind of where I am at right now. I wanted to start this entry off with a story back from my grade school days, but for the life of me, I can’t remember exactly what grade it was or the specific school I was attending at the time. The one thing I remember distinctly was sitting in the lunch room of that school one day with a couple of my buddies as we hatched out a plot that (unbeknownst to us at the time) would actually be the catalyst to effecting some change at the school.

I think this was around my Intermediate or Junior High school time – 7th or 8th grade maybe, but it could have been earlier. Regardless, the plot we hatched that day was to minimize the amount of homework we were getting at the time. Obviously, things are a bit skewed when you are that age, but I seem to remember that we were frustrated that there appeared to be no communication between the teachers of various subjects on the amount of work each one would assign on any given day. Thus we were getting several hours of work that limited, or eliminated, any of the free time we had as kids between the end of the school day and bed time. So, we ended up coming up with a Declaration of Independence from Homework (or something to that effect). What we wanted was for the school to put a limit on the amount of homework that was assigned in any given subject so that we could balance that work with still having some free time as a kid. We wrote up a petition and started passing it around during lunch time for the rest of our classmates to sign. Of course, me being who I was, I had to be the first to sign, and make sure my signature was the biggest, just like John Hancock. Within a few days we had three or four pages of signatures. Not too bad for a group of kids that weren’t part of the most popular cliques that are typically formed by school kids.

The most amazing thing was that the school officials took notice and actually acted upon what we really thought was a pointless whim. They saw the dedication we had to this particular issue and our ability to showcase it enough to have many of peers agree and sign the petition. So they made some changes to show their respect to that dedication and even shortened the school day by 15 minutes as a result. That may have been the first instance where I truly learned the value of speaking one’s mind, regardless of who may or may not like it.

That was kind of reinforced this past week as my mother brought over an essay my sister wrote for a class assignment back in 2002. The essay was to write about a person that had a profound impact on her life up to that point. Naturally, she picked me! (Just kidding *insert proper emoji here*). The purpose of her choice was to point out that I tended to be a “non-conformist” back in my youth and not let what other people thought or said to influence my thoughts about myself, or my beliefs. I guess I was just born to be a rebel. I think I lost sight of that along the way of growing up and being more adult after my early 30’s, when she wrote that essay, or maybe she saw something more in me that I didn’t even realize I saw in myself at the time. She wrote that I “have always been the type of person who will not allow the spoken word to interfere with what he deems worthy or necessary.” That I have “always been willing to take the different perspective, even at the risk of peals of laughter and resistance.”

“He has always chosen the ‘uncleared path.’”

Maybe I’m just turning into a Grumpy Old Man, but I feel like a lot of my frustration of the last few years has been because I have allowed myself to lose sight of those qualities that my sister saw in me almost 20 years ago. I think that’s one of the reasons why I wanted to start this blog several years ago, but allowed myself to avoid using it for that purpose until recently. I think last year I finally woke up and had my “Mad as Hell” Network moment. I can’t point to any one thing that got me mad as hell, but I think just any number of things that in no way in any level of hell should be accepted, we have come to indeed accept as society . Most of all, I think I was mad at myself for not going to the window and screaming at the top of my lungs at the fucking lunacy we have devolved into as a society. 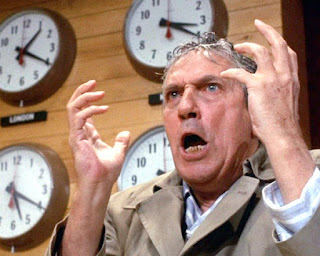 Erin’s Regional Competition track meet held yesterday (May 5th) was another case in point. This was the second weekend of completely piss poor weather to do anything outside. Sort of the perfect bookend since the first week of season turned out the same way. My gut feeling on both those days was just to say screw it and keep Erin home. There was absolutely no reason for either competition to be held on either of those Sundays at the level these kids were competing at. But I ignored my gut feeling and trusted that those in charge were making the right decisions. I compromised my values, and even worse, didn’t really speak up about it after the first week, like I initially wanted to. That made me pissed at myself even more. I lost sight of what it was about me that my sister wrote about all those years ago. So I think the last few months of this blog has been me making the course correction to start clearing that uncleared path once again. It is also the same reason I wrote an e-mail expressing my feelings on the matter and sent it out to the coaches and parents. It’s something that I felt needed to be said and everyone involved needed to hear it, because I got the impression that a few other people felt the same way. It was about time someone stood up and said it. I did it because I was absolutely furious at myself for not doing the right thing by staying home on either of those days, regardless of the commitment we made when signing Erin up for track this season, and trusting someone else to make a decision for me and my family. I hope what I said gets a lot of other people mad as well – whether they agree with me or not. It’s long past time for us average, everyday people to stand up and start being heard just like the fringe elements of society have been doing for far too long now, even if we don’t necessarily agree with one another.

In fact I hope that us average, everyday people don’t always agree with one another. It’s the discussions that can come out of that disagreement that can bring about the change that is necessary in our society instead of letting the others do it for us. We have been letting them do that for far too long now as it is. So whether it’s getting necessary changes in some dinky CYO athletic event that keeps the health and safety of everyone involved as the main priority or finally getting people into public office who have an ounce of common sense (and common decency – and no I am not just talking about Trump, but every single elected official in the United States and beyond), each and every one of us need to start picking up a shovel or hatchet and start clearing that damn path.

I get closer to knocking on Heaven’s Door every single day, and I have wasted a lot of my previous years lost in the woods hoping someone else would find that path for me because I was too afraid to say I was lost, and then do something about it. I’m not going to go to my grave with that regret on my shoulders. I’m going to do something about it. I will continue to say the things I think need to be said. If people agree with me, then that’s great. If they don’t then that’s great as well. Let’s get a discussion going and bring some actual progress to the topic. I’m damn tired of walking around in circles and having to keep my mouth shut for fear of pissing someone off. It’s about time that a lot of us got pissed off and started saying it.

I’m picking up the shovel and getting back to that uncleared path I abandoned long ago. Everyone else is welcome to pick up a shovel and join me. If you disagree with my choice of tool or which direction this path needs to take, then by all means let’s discuss. It’s long past time to get mad as hell and start making the changes that need to be made.
Posted by BJWyler at 1:39 PM No comments: