That day that I thought was coming a year ago has finally arrived. We had to say good-bye to Flash this morning. It was a moment I had been anticipating for a while, but the end came all too quickly and hurt just as much. Though he had some ailments, it wasn’t quite like what Willy had to go through in his final years. Overall, Flash had a good life and was probably the healthiest of all the cats I have had as companions. It was only his old age, and a slight blood pressure problem that was affecting his kidneys that really got him down these last few years. His hearing and sight certainly weren’t what they once were, but he always seemed to know when I was in the room. He was a cuddly lap cat until the end.

I got home as normal yesterday, and ironically, had to call the vet to make an appointment for both Flash and Hershey for their annual exams. I was prompted to do so a bit earlier than I had originally planned since it seemed that neither of the cats had been eating as much as they normally did, something I attributed the on-going renovation we have going on in the house this past week. But otherwise everything seemed normal, until the evening when it was clear that Flash was not acting as his normal geriatric self. He was much more lethargic and his normally over the top loud meowing was reduced to a raspy whisper. Flash was close to 20 years old, which even for a cat is a pretty long time. Over the course of the last 5-6 years, his age was starting to show as he just wasn’t as active as he used to be, and the arthritis in his hind quarters started to limit his mobility, as did his decreasing eyesight. During that time, there was more than one occasion that I thought he would need a trip to the vet and it would be the last one he would make, but time and again he shook off whatever has gotten him down and was back to his normal self in a few days.

He joined the family in 2001 or 2002, after I decided I needed a companion for Willy and one that wasn’t as skittish around strangers as Willy had been. I originally was looking for a kitten again, but upon seeing Flash at the store, realized he was the one who needed to come home. His favorite position was spread-eagled on the flat top of the cat tree, and that was my first sight of him in the store. It was just so unusual to me to see a cat do that, I knew he would be the perfect fit for the family. His exact birth date is unknown, as he was picked up as a stray, but he was around two years older than Willy at the time, so was basically an adult cat. 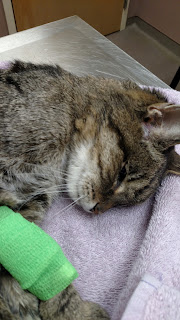 Flash resting peacefully in the final minutes we had left together


I think the biggest scare we had with Flash came in August of 2008. One day, in the afternoon or early evening, a typical day as any other, I thought I heard a thump or a bang while I was sitting in the living room. Not something really unusual as there always seemed to be something or someone thumping every now and again in the house, so I really didn’t do much to investigate. It wasn’t until later, when dinner time for the cats rolled around that I noticed something was amiss – Flash hadn’t come running along with Willy for their eats. A quick search of the upstairs turned up nothing. Somehow, it seemed Flash had disappeared. Even checking their usual hiding spots didn’t reveal our feline friend. It wasn’t until a second check of the upstairs that I noticed the one window screen on the side of the house was slightly ajar. Flash loved to sit in the windows during the summer time, and it appeared that this time, he must have leaned too much against the screen and it gave way, sending him plummeting 20-odd feet down to the ground. It was then I realized what that thumping sound from a few hours previous must have been – the screen giving way. However, upon checking the perimeter of the house, he was nowhere in sight.

This prompted a desperate search around the neighborhood for Flash that lasted well into the wee hours of the morning. Naturally, this occurred on the evening before I was to begin night classes for my computer training and certification course. We eventually found him wandering the neighbor’s back yard, but he was obviously scared and any time I approached, he took off running. A one point he got under the fence that separated the yard from the junk yard of sorts of the businesses that are situated behind our property. Another hour or so of trying to corral him between tractor trailer bins and huge orb weaving spider webs yielded failure once more as Flash took off running, and we lost track of him. It was at that point, heading back to the house that I lost it, fearing I would never see him again. He must have had a guardian angel that night, though, because as we headed down our small dead end street, Shannon saw Flash waiting by the back door. I went in the front, so he wouldn’t get scared off again, while Shannon kept an eye on him outside, and he leapt into the house as soon as I opened up the back door.

I knew in my gut that last night was Flash’s final night at home, even though I was hoping he would prove me wrong one more time. It just wasn’t meant to be, this time he just wasn’t getting better, and this morning I knew the inevitable had come. When put in perspective, 15 years doesn’t seem like a long time in the grand scheme of things, but when you consider that 15 years is more than a third of my entire life, it really brings home how much a part of my life Flash and Willy have been, and how much I still miss Willy, and how much I am going to miss Flash for a long time to come. Willy loved to sleep on my chest as a kitten at night, and Flash loved to cuddle up on my lap in the living room chair at any point during the day. 15 years was far too short a time.

Flash’s Pictures
Posted by BJWyler at 7:55 PM No comments: