The Outhouse is Open for All


Let me get this right … I can put on a dress, start singing “Man, I Feel Like a Woman” by Shania Twain, and mosey on into the women’s bathroom anywhere in America? Wow, a pervert’s dream – thank you for that President Obama. I am so glad that was a top priority in our system of government in May. Quite frankly, I don’t care where anyone decides they need to go, truth be told a tree is good enough for me if the need ever arises. Perhaps my sister can speak to this more, but I’m sure Europeans must be laughing at us over this situation.

You know what the quickest solution is to this problem – simply designate certain bathrooms to be gender neutral. We have family bathrooms popping up all over the place, so why not simply enact some guidelines or legislation that all places with public bathrooms build, or designate an existing one, to be the one that serves them all? No, what we get instead is threats of withholding funds from schools, among other things. Brilliant! and way to go President Trum… I mean Obama. Thank God that there is nothing else going on in the world, that our elected leaders needed to focus on this issue with the utmost urgency. I feel so much safer now when I walk out of my front door knowing that I can take a dump in any bathroom that suits my fancy. 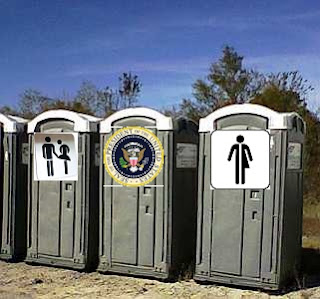 After all, it’s not like we have a presidential hopeful who put a classified government network at risk. Oh yeah, that’s right – it’s no big deal. Just used personal e-mail to send some work related stuff to colleagues’ work e-mail addresses. Yeah, it’s not like hackers use the EXACT SAME SCENARIO as a means to launch phishing scams designed to elicit personal or other sensitive information from users. And yet, this seems to be treated as no big deal.

When I worked for a tech company, the biggest problem we had on the internal network was user’s workstations being infected by spyware or other malware because user’s were fooled into opening a poisoned e-mail because they thought it was coming from a trusted source, even though it was coming from a non-network e-mail address. Heck there was one time where my fellow network administrator received an e-mail from what looked like one of my legitimate AOL e-mail addresses, and opened it up without a second thought, clicking the link that it contained. Needless to say that the e-mail did not originate from my e-mail address.

So here we have one of the potential future Presidents of the United States opening the doors to a secure and classified government network by getting her co-workers used to receiving e-mails from a non-network e-mail address. And she still feels like she did nothing in the wrong. This, if nothing else, is grounds for me to consider her completely unfit to lead our country at the top spot. The sheer idiocy of this is astounding, and the fact that Hilary Clinton is most likely going to be our next president is mind boggling.

I’m not one to go spouting off telling people how they should vote, simply because I am hardly any more educated than the next person, though it seems a lot more educated than most of the morons who simply refuse to participate in one of those nearly unique freedoms our government does provide us. But then again, people too stupid to make the time to ensure they act upon one of our rights of American Citizens probably shouldn’t be voting now that I think about it. Regardless, this upcoming presidential  election is the one that I have found the most difficult to decide upon my candidate of choice. At least that was the case until a co-worker of mine reminded me of one important part of the balloting process – the write-in vote.

So I am going to use this space to encourage everyone reading this to go out and exercise one of our basic rights of American citizens, and when you do so, instead of flipping a switch or pushing a button for one of the two party nominees, activate the little slide out box on the side of the ballot and write-in a candidate that will actually be good for America. My personal choice at the moment is going to be a toss up between Democrat Bernie Sanders, and Republican John Kasich. Either one, while not completely ideal, are certainly better by far than the presumptive nominees we will be stuck with come November. I hope that everyone out there will do the same. It’s long past time that we send a message that the current electoral process is failing the American people and it needs to be changed. I complained about the massive amount of money spent by campaigns in the last election. It’s about time that all that money be put to better use, and we finally need to act like a United States and reject the candidates that will ultimately fail us as a country.

Thank goodness I still have this Outhouse to hang around in to maintain my sanity - and it welcomes all people regardless of your "persuasion". Just make sure to get out and vote.
Posted by BJWyler at 10:58 PM No comments: