On June 26th, the Supreme Court of the United States of America issued a ruling on Gay Marriage. It seems it was a monumental day indeed. I don’t recall quite a noteworthy ruling by the court since Roe v. Wade. Somehow I don’t think this ruling will be any less controversial and will continue to be talked about in the decades to come, like the one that legalized abortion over 40 years ago. It will be curious to see how, or even if, this decision shapes our nation in the future.
From a personal standpoint, I always puzzled over why this was such an important thing for people to have, aside from the legal aspects of course. Regarding that, I always wondered what the issue was to provide gay couples the same rights and benefits as everyone else. Money has something to do with it I am sure. But I have always wondered why not simply fight for making Civil Unions have the same weight and strength of a traditional Marriage. After all, if the legal rights and benefits were the crux of the issue, then having Civil Unions on the same level of Marriage would solve the problems. Perhaps simplicity might have something to do with that little point. The one thing that always got under my skin with that though, was the argument that seemed to be used when all else failed – Marriage is just a word (or piece of paper), so why is it such a big deal to prevent gay couples from marrying? To me, that is just one of those asinine arguments that people seem to resort to when they can’t amply defend the stance they are taking. If Marriage is simply a word or piece of paper, I thought, then why is it such a big deal to have it? Let the argument stand on its own merits – couples, regardless of their sexual orientation, should always have equal rights under the law. 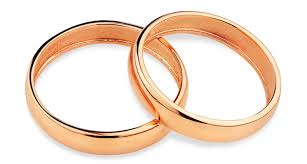 To me, Marriage is an ages old tradition, and while some traditions may be strange or “bad”, I don’t think Marriage falls into that category. For me, Marriage will always be a man and a woman expressing their love for each other and desire to spend their lives together. No ruling will ever change that, but I most certainly am pleased that, one way or another, America as a country has taken one more step towards a better society. It has been too long in coming, much like providing equal rights to women and to African Americans. Sometimes it still boggles me that as forward thinking and advanced as we can be sometimes as a society, that things like this seem so difficult to grasp.
So, at any rate, congratulations to the Supreme Court for taking America one more step in the right direction, and good luck to all who now can take the next step of their live together. I would just temper that with a reminder that there is still one more important principle to remember that this country was founded on – religious freedom. As much as it is a right to have two people express their love through marriage, it is also the right of religious institutions to refuse to perform those services based upon the beliefs of their religion. Ultimately, regardless of one’s personal beliefs, it is that deep rooted and ancient belief in some higher power that provides us the basis for right and wrong, and that is one tradition that deserves all of our respect.
Posted by BJWyler at 10:30 PM No comments:


Coward.
I’ve spent the last couple of days trying to work out what I wanted to write down here so it wouldn’t sound like some preachy diatribe on the value of gun control. I will say this, though. As far as I can recall, gun ownership has never been a God-given right, despite what the NRA leadership may want people to believe. Truth be told, their leadership will be the reason that we end up with draconian gun control laws, instead of working for responsible gun ownership. From the way they talk, it would seem to me that they are advocating for what could potentially become a Police State, with armed guards on every corner. But then again, talking about responsibility and America seems more like an oxymoron than anything else. After all, how can we as a society, talk about responsibility when idiots spill hot coffee on themselves while driving, and win the resulting lawsuit. We as Americans have seemed to absolve ourselves of any and all self-responsibility possible.

It’s not surprising though. Heck, the NRA leadership would rather blame video games for people dying, instead of the state of our laws and society as it exists in America today. It kind of reminds me of that time only a couple of decades ago when rock music was blamed for serial killings and suicides. Yeah, it had to be all those subliminal messages making guys like Son of Sam kill without reason and kids take a gun to their face. I wonder though, what kind of outrage there would have been had there been a mass outbreak of kids mowing the lawn and doing their chores without an argument had some rock groups been crafty enough to backwards mask those messages into their songs. Nope, much easier to blame someone or something else for what troubles us. Because then, we and people like the NRA leadership and our elected officials don’t have to actually trouble themselves with the real cause of these issues. 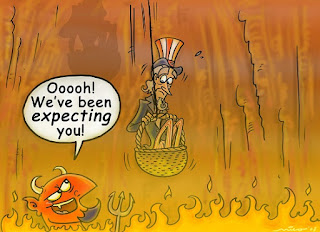 No, what this is really about is that word I started out with, because that’s what this all boils down to in the end. In South Carolina we have had yet another senseless mass shooting. At least this time, the kid who did it owned up to what he did and didn’t end up killing himself to boot. That would have been the ultimate cowardly act at the end of a horrific cowardly act. At least we can’t seem to blame the failing health care system for this one – at least not yet. So far, the reason we have why this kid went in and shot up nine people in the middle of practicing their faith is because he “didn’t like black people.” Good job there pal, saving all the white folks from nine God-loving people who were no threat to anyone. If he really wanted to protect all us white folks, he could have gone and found some gang-bangers and shot them up instead. But then, of course, one would have to have at least of modicum of cojones to try to do that. Not one of these guys who have shot up churches, schools, or movie theaters have that though. We only get the next level of their cowardice when they try to hide behind an insanity defense. Christ, at least own up to the fact that you’re a spineless coward – but then again doing that takes some bit of spine anyway, so I guess that’s too much to ask. All these big guys with their guns and the only thing they can do is shoot up a bunch of defenseless people going about their business, not causing any trouble to anyone else.

And our society just keeps on letting things like this happens. It’s not a matter of if, but when and where the next mass murder will take place in America. In all reality, the terrorists are wasting their time, we’re doing a pretty good job of destroying our economy and ourselves without them. They might as well just sit back and watch. I have to agree with the President on one point – we have an issue that seems unique to America out of all the other First World (or any other number) countries out there. We can certainly point out the root causes easily enough, and those do not include music or video games. And yes, it does involve grown-up talks about responsible gun ownership and appropriate gun control laws, among other things. After all, when you have a tool with one, and only one, express purpose – to kill a living thing, responsibility should be at the forefront of the discussion.
Posted by BJWyler at 8:44 PM No comments: