Vacation. That wonderful time of year that one can look forward to getting away from the grind of work. And yet, vacation can be more exhausting than a few days of work itself. More and more, I become aware of the old saying of needing a vacation after taking a vacation. Sometimes I think there is more stress in planning out a day’s activities and then dealing with the inevitable changes as the weather, crowds, and other unforeseen bumps in the road alter those plans throughout the day, than during a day at work. As fun as it is taking the week doing some of the things that we enjoy and don’t nearly get enough time to enjoy as much as we would like, I can’t escape the feeling of needing another week just to be able to vegetate and do nothing. Letting the body and the mind relax and recharge more completely than running around and trying to cram as much activity into one day could ever do. Anyway, 51 more weeks to go before we can once again look forward to escaping the annoyances of work for an all too brief time of “rest” and relaxation.

One thing that stuck out in my mind this past week, though, was a trip to Gettysburg. This was my second time there as an adult – the first being last year when my (then) 9 year old daughter had an interest in seeing the battlefield. That trip we didn’t have a lot of time, so only walked the area around Pickett’s Charge, and the famous Copse of Trees. This year, we gave ourselves the day so were able to walk the museum and watch the film and cyclorama presentation. We then headed out and toured the Northwestern battlefield – McPherson Ridge and Oak Ridge, the area where the three days long battle had begun. I don’t know how to explain it, but I’ve always had a strange feeling when standing upon historic ground like this – knowing that at some point in the past people not unlike myself were standing on that very spot, going about their lives much like I was doing, albeit under far different circumstances depending on the particulars of the historic site. I think it’s just my mind trying to make a connection with those people from long ago, trying to put myself in their shoes and wondering what I would have been doing at that moment in time if I had been there with them. That feeling was only reinforced by the memorial stones, both large and small, that indicated the spots were the various brigades and divisions of both armies were stationed during the battles. As large as the battlefield and town seem to one small individual walking along trails in the sweltering summer heat, it made me wonder how small this place must have felt when over 160,000 men, along with their horses and various armory camped on the ridges and in the valleys in and around the town.

I was hit with a lingering wave of sadness as I strolled around the Confederate line around the Peace memorial, which was north of Oak Ridge. There the Southern batteries had opened up upon the Union positions along the Railroad Cut near McPherson Ridge to the south and Oak Ridge. I couldn’t imagine what that would have been like, being a part of that placement, and having full view of the enemy position just west of the town. Not quite close enough to see the whites of their eyes (though Oak Ridge was even closer to the Confederate’s line), but certainly able to see the carnage that was raining down upon the Union soldiers in blue. As I read the placards placed around the area, explaining the details of the engagement, and the eventual march of the 8000 Confederate infantry from that point towards Oak Ridge, I found it hard to image what that feeling must have been like for any one of those men marching upon the Union line wondering how much longer they had left to live. As the Confederate infantry neared the stone wall that lined the ridge, the Union forces rose from their cover and opened fire. I don’t think I can ever shake that feeling that came over me knowing I was standing upon ground where, in the span of minutes, 2000 men not unlike myself were struck dead just over a century and a half ago. 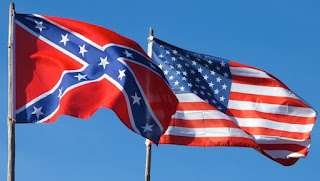 It was there, at Oak Ridge, where we had to call an end to the day – there never seems to be enough time to take in everything we want to do any given day. It was on our way back to the motel, reflecting upon my thoughts and feelings as I processed what I had seen and read, that my thoughts turned to the recent controversy of the Confederate flag. Being neither Black nor a Southerner, I can look at the issue as a dispassionate observer. To me, it’s a shame that a symbol that represents the heritage of a great many people in this country has been perverted into a symbol of hate, not unlike what the Nazi’s did to the Swastika. A discussion on the reasons that brought about the Civil War is a bit beyond the scope of this simple blog, but the issue of slavery was just one of several things that brought about one of the most tragic times in our nation’s history. The war itself wasn’t even fought to free slaves, but, from the perspective of the Union leadership, to preserve the state of the Union. Even the Emancipation Proclamation was a political tool to strengthen the North’s position – it didn’t free slaves in the non-rebelling border states.

To me, the Confederate flag never represented slavery, but the many ideals that caused a large number of men to take up arms to defend their new country – most of whom never owned a slave a day in their life. In all honesty, the flag of the United States is representative of that, and more. The author of our Declaration of Independence was a slaveholder, and the Constitution of the United States upheld the institution of slavery. I seem to recall the notion of Indentured Servitude still being a normal thing during these times as well. Let’s not mention what the Westward Expansion under Old Glory meant for the natives of this land. Even after the dawn of the Industrial Revolution (which brought about human rights issues itself in this country), there were many in the North that still had a vested interest in the institution of Slavery. After the dust settled and Reconstruction but a harsh memory, inequality was still the norm for this country – and not just for those of African descent. Heck, just the recent issue of Gay Marriage shows just how much inequality is represented under a symbol that is supposed to represent the ideals of Freedom and Equality for all.

So, I ultimately have no issue with the raising of the flag that represents the Confederate States of America. In fact, the ideals under which the United States of America was founded, and thousands gave their lives for in the two centuries since, every American has the right to raise that flag if they so desire. That being said, I do believe that the flying of Southern Cross should be limited to the rights of individual citizens and not be done on government property. Ultimately, whether it be the “Stars and Bars” or the more popular second Navy Jack (which was actually never an official flag of the CSA), the symbol represents a country that no longer exists, and one that was never officially recognized before its demise. Let the freedom of choice remain with the individual citizen. Right or wrong, we still need to honor those of our forefathers who fought for what they believed and held in their hearts to be right. We as a nation have grown and learned from some of our past mistakes, though we still have a long way to go. Do not let the past, or the actions of a criminal few, continue to prevent us from looking towards a more positive future and reaching for those ideals a handful of brave men gave their livelihoods to bring forth eleven score and nineteen years ago.
Posted by BJWyler at 9:34 PM No comments: