Hail to the Chief


What an interesting couple of months we’ve had since my last entry in this here blog. There just never seems enough time to write them like I had originally planned. Well, I’m not making a resolution about it, because I just don’t believe in New Year’s Resolutions. A belated happy 2017 everyone!

The biggest question for myself was what I was going to write about when I finally took the time to sit down and write another blog for my Outhouse reading pleasure. Certainly I haven’t been lacking for subjects – I had wanted to give one more update on my Extra Life efforts for the year (thanks to all who helped me raise $250 for CHOP in 2016! As a group, all CHOP supporters raised almost $200,000 this year!). There’s also that little movie set in the Star Wars universe titled Rogue One that came out about a month ago. I posted my initial reaction on Facebook after seeing the movie with Erin on opening day. Long blog short, to reiterate it ranks as one of my top (if not the top) movie in the franchise as of right now. But like Extra Life, there’s more I can say on that topic, but just am not prepared for it, and I wanted to get a blog entry in while I am enjoying an extended weekend and have the time to sit and pound on the keyboard for a bit.

What really got me motivated, however, is that bit of unpleasantness we have been witness to over the course of the last 12 months and more. Oh yes, the wonderful Electoral Process we have here in the United States of America. I’ve already said my piece about the candidates and the process in a few entries over the course of 2016, so I don’t have much to add to that, but a few things surrounding the inaugural really got under my goat, and I just have to get it off my chest, so for good or ill, here we go!

There’s no doubt that Representative John Lewis has done a great service for this country, and more importantly for the African-American community over the course of his life. All due respect goes to the man who put his life on the line to support those basic human rights that for some reason we all still have to fight and struggle to achieve at this point in the 21st Century. However, I take serious issue with his comments (and those of many others to be fair at this point) regarding the Russian’s and the “interference” with the 2016 election. To say that now President Trump is not a legitimate President because of this “interference” is just as asinine as the Birther movement against President Obama has been over the last eight years. For Mr. Lewis to say that what the Russians did undermined the fair and democratic process in this country is disingenuous, especially in terms of the information we received out of the DNC this summer. The Democratic insiders did more to undermine the fairness of the electoral process than the Russians ever could do without Putin personally voting for Trump. It’s that kind of Political bullshit that caused Trump to win the election in the first place. 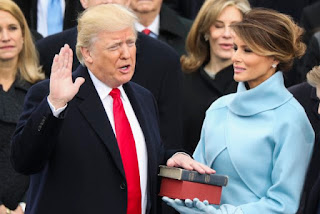 At this point in time, there is absolutely no evidence that the Russians hacked any voting machine in this country to give Trump the votes he needed to win the election. Therefore any cause that the Russians gave for people to vote for Trump over Clinton is wholly based upon the actions of both political parties.

The nonsense going on now just makes the Democrats look like spoiled children crying and stomping over their feet because they didn’t get the toy they wanted. At the end of the day, they didn’t lose the election because the Russians unfairly released negative information about one party without releasing similar information about the other party (none of which was ever proven to be falsified information as far as I know). They lost because the Republicans courted the right people in the right states which the Democrats ignored. The Democrats lost because of the political shenanigans prevalent in both parties, and like the New England Patriots, they were the ones who got caught with their pants down, even though they weren’t the only guilty party.

The Democrats ultimately lost because they were more concerned with Glass Ceilings than they were with ensuring they had a candidate that was the best possible alternative to what the Republicans offered up. This country has been more than ready for a female President for many years. We just needed one that was a good candidate for the job – from either party. The ones we have had so far, are by no means close to being that. There is absolutely no way that Trump should have been close to winning this election. The Democrats lost because of their own actions not because of the actions of the Russians.

You want a good conspiracy theory for this past election – I got one for you! I fully believe that Joe Biden, despite the untimely death of his son, would have been prepared and would have gone through with running for President if he thought it was the best thing to do for his party and the country. Despite being an insider himself, and still being a Sanders supporter, I found him to be more in tune with the needs of all Americans than the Clinton’s ever have been. I would have supported and voted for either Biden or Sanders in the general election. However, it is my firm belief that in addition to the death of his son, the Democratic party made it clear to Biden that they wanted Clinton to be the nominee and they ultimately cemented his decision not to run. I think that if the Democrats weren’t so hell bent on the Glass Ceiling, they would have and could have convinced Biden to run for the nomination. He would have won in a landslide.

Now we have to live with the results of the typical Political bullshit and corruption that goes on in Washington for the next four years. Like I said in my previous blogs on this topic, what we have witnessed is many Americans giving a big middle finger to the Political Establishment and the Media for decades of self-serving nonsense. The Establishment and the Media only have themselves to blame for this outcome – no other country or entity is responsible for results of this election. It would be my hope that they all grew up and learned a valuable lesson from this, but unfortunately, as history has shown, the only thing the political parties will take away from this is the motivation to further entrench their own interests and desires over that of the common American peasant. Mr. Lewis’ comments are only proof positive of that attitude.

At the end of the day, President Donald J. Trump may not be the person I voted for, nor the person I would want leading the country, but as an American who exercised one of the most basic rights available in our Democracy, he is my President and will be my President for the next four years. I wish him all the best and all the luck that he can make our country a better place in which all of us can live. At the very least, if he can be the one who truly changes some of the typical business as usual in Washington, than I would consider that a success and a positive step forward in our process of Democracy.
Posted by BJWyler at 10:36 AM No comments: