Before I get to the topic at hand, I just had to comment about the wild and wacky weather we had this winter season. As much as I like a good winter storm, I never expected to have one bring us a White Saint Patrick’s Day. Although I did find it fascinating that once again we got another smaller snow storm right around March 9th this year as well. This was something I had noticed 20 odd years ago – it seems that when we get snow later in the season, such as February, March, and every once in a great while April, it seems to hit around the 9th of each of those months. Obviously this is just my perception, but still, it’s always one of those things that seemed to perk my interest whenever those storms come to town with a bit of snow the last couple of decades. It would be fascinating to do a bit a research and see a record of snowfall in this area and how often it does fall around the 9th of the month in comparison to other days.

But that’s something for another time, when there is more time, I suppose. What I wanted to do this time around was get an early start on talking about Extra Life for 2017. I have to thank everyone again for all the support you have given me over the last four years. It’s a great feeling to know that being able to do something so simple can have a great impact on so many, especially when those affected are kids. Combined, all of us who supported the Children’s Hospital of Philadelphia in 2016 raised nearly $200,000 for CHOP and all the kids who need its services. By comparison, my $250 raised doesn’t seem like a lot, but it was all put in perspective for my by a fellow Extra Life Stream Team member not too long ago. He had mentioned that there are specialized baby bottles that allow infants born with cleft lips or other mouth deformities to be able to nurse. These bottles only cost a couple of bucks, so in the end, when someone donates a dollar or two, they are helping to buy these bottles for the kids that need them to survive. It hammers home the point for me, that every dollar really does make a difference and my #1DollarAtATime campaign went a long way to helping a lot of kids. So I’ll be hyping it up again for this year’s fundraising, but I still want to do more. 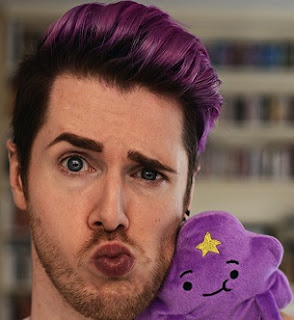 Already this year I have raised $35 of my $250 goal. I am hoping to keep bumping up my goal, as I did last year, all throughout the remainder of the year, and want to try to do more to reach my ultimate goal of $1000. That’s where the Purple Hair Challenge comes in. As I have watched and talked with many other Extra Life participants over the years, many of them have come up with ideas to enhance and encourage their fundraising efforts. Some host giveaways for games and other things, while other perform stunts after meeting a certain goal. I want to try to do both this year. I can’t really afford to do much in the way of giveaways, but I have an idea that I have been kicking around, and will reveal in an upcoming blog post. For this entry, I want to talk about my “stunt”.

Quite a few Extra Lifers do things like shave their heads, the ice bucket challenge, wax their backs, etc. so I figured I would join in the antics this year. So for my 5th year of fundraising for CHOP, if I can raise that $1000, I will dye my hair purple. The only stipulation is that I would like to meet that goal before I begin my 25 hour marathon on Friday, November 3rd. That way, I have enough time to get it dyed before the marathon and show off the efforts of my challenge – and the generosity of all involved, live on stream. This would be the first time in my 40+ years of life that I would actually dye my hair a different color, so I’m kind of excited about the prospect of being able to do something slightly wild and crazy. I hope I can count on everyone reading this to help me meet this challenge – even if it’s only to pass this blog entry on to other people you know, and mention the guy trying to get purple hair.

It’s also important for me to note, as I have done in the past, that everything I raise in my efforts goes directly to CHOP and their kids. That’s one of the other reasons I am so proud to be able to be a part of something like this. Everything we do is a complete and direct benefit for the kids of the hospital we have chosen to represent as a participant. I’m glad to be able to do something like this year in and year out, because I never know when something could happen, and it’s our family or the family of someone we know taking their child to CHOP. I never want to see that day come when Abby or Erin need the hospital; or Connor or Fin; or Ally or Cate; or Nick, Joey, or Cate. I don’t just do this for the kids who need the hospital now; I also do it in case the unthinkable happens and one of my kids needs CHOP and I want to make sure they have the best care possible. If I need purple hair to do it, then I don’t mind at all!