The Wackadoodle and Us. That was an idea that I had for a long time, and even mentioned it in the second posting I ever did for this blog. I think I had even made an attempt to start writing down Marley’s antics while I was working for a tech company back between 2009 and 2013, just to try to relieve some of the stress and pressure while at work. Unfortunately, that stress sucked out the motivation to do so pretty easily. I kinda wish I forced myself into writing a blog about the doodle now, but I have a hard time getting motivated to write in this one any more, the short blitz of the last eight months or so aside. I wish I wasn’t here writing this one. But it’s one that I need to do to honor our companion of the last 11 years.

It’s been just over three years since my last similar entry, when we lost Flash in 2016. Doesn’t seem like that long ago, but I guess it has been. It’s already been a week since we lost Marley late on Saturday, July 20th. This one hurts a lot. Not that any of our other losses didn’t hurt, but at least with Willy and Flash, we had time to prepare for the inevitable. Willy was never in good health and it was only a matter of time. Flash was just a good old cat and he lived out his life well. Both hurt when they passed, but we still knew that their time was coming soon. With Marley, he seemed perfectly fine Friday morning, and then, less than 48 hours later, we were saying our final good-byes. It just didn’t make sense, and we just were not ready for this time to come.

Marley lived up to his namesake well in his early years, but mellowed out a bit as he got older. He was still a bit of a troublemaker every now and then, but our proudest moment came when we were able to train him to get along with Hershey so they could co-habitat together. I regret not trying to do it sooner with Willy and Flash, but I don’t think the cats would have accepted it anyway. They were used to having a house all to themselves for far too long. That was probably my biggest regret with the cats – not being able to get them all to live together. 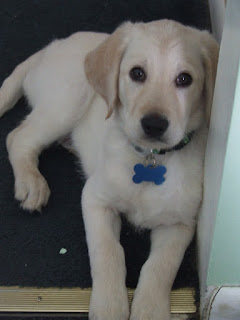 Yeah, Marley was a special dog when he was growing up. Like any dog, he liked to chew, but Marley seemed to take it to another level. He ripped apart every dog bed we got him within a day. He chewed the furniture naturally. And he turned out to be a wonderful garbage picker. Many a day we came home to find the trash can knocked over and garbage trailing around on the floor. He never got out of that habit, no matter how much we think we garbage proofed the house, every once in a while we would find evidence of him poking about one of the other cans. He even liked hitting up the litter box on a regular basis. Yeah, there was nothing that dog wouldn’t eat – from a candy cane full of Hershey Kisses, to a box of Cadbury Eggs, to some chicken bones in the garbage outside, to even my glasses off the bathroom sink one day. There was nothing he wouldn’t eat, it seemed. Unfortunately, that seems to be what finally did him in. After the trip to the ICU at the animal hospital it turns out his digestive system was blocked up and would require expensive surgery to fix, but that wasn’t the only issue. In the end, at best, he had a 50/50 chance of making it past the weekend. We were told our decision wasn’t the wrong one, but it still feels like it is.

He was one heck of a special dog. I seem remember reading that puppies won’t go to the bathroom when they are caged. Well, one day when I got home from work, not only did Marley go, but he got it all over himself, requiring an emergency bath. Heck I still remember hitting a pile of poo every morning when he was a puppy, no matter how many puppy pads we put out in the house. That dog could go and go and keep on going. Cleaning up the back yard is probably the one thing I will not miss. But I wish I still needed to do it. Yup, he was special all right. I still remember a time when Marley was investigating a strange being that landed in our back yard. He would cautiously step up to it to try to sniff, then leap back just in case it tried to attack. Then back to try to sniff again, then leap back as if it made a move towards him. This went on for a couple of minutes as he circled the strange being and eventually managed to get up close enough to touch with his nose before turning tail and running away, just in case it attempted to attack at that moment. The strange being – a basketball. So many stories and I don’t even remember half of them now. I wish I had forced myself to write them down like I wanted to all those years ago. I wish I still had a few more years to start writing new stories down about our special doodle.

I’m still in that phase where I’m following habits developed of the last 11 years – trying to look for and avoid the poo spots outside while heading to the shed, or making sure I don’t step on him when I get up in the mornings to turn off the alarm. I still wait to see him at the window when I come home and then rush outside to wait for me to open up the gate in the back. I still think he’s waiting in the wings for Hershey to finish eating so he can rush in and gobble up what she didn’t finish. He was our special doodle and I’m going to miss him every day.
Posted by BJWyler at 6:37 AM No comments: